Close
HomeOur BlogGet on the waterThe Two Towers, Sea Kayaking in Jersey, the...

The Two Towers, Sea Kayaking in Jersey, the island of the tides 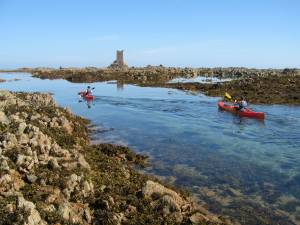 Heading to Seymour Tower on the south-east coast of Jersey

I’m spoilt living on Jersey, the island of the tides because I have so many sea kayaking opportunities both around the coastline and offshore. But, it’s a 50m walk down my path and onto the beach where I grew up that enthrals and rejuvenates me.

When I slide my kayak onto the water two hours after low tide, it only needs a couple of paddle strokes before I’m whizzing along like a salmon running a river. Here, the 12m tide rushes amongst a labyrinth of criss-crossing rocky channels that make this the largest rocky intertidal area in Europe. Beneath my kayak is an aquarium of marine life.

A few hours later, what was once a mass of rocky gullies is transformed into an ocean that’s bordered by two 19th century offshore towers. The two towers lure me away from human sounds and into a place where nature is in control. On a calm sunny day, only the sound of the flowing water breaks the silence.

Eventually, my watery route will become land. Now I can retrace my journey on foot as if I was walking over the bed of a river.

Original article in The Paddler Magazine.